skip to main | skip to sidebar

Here it is at last!


The book of my journey around Britain is published by Sandstone Press on 21st April 2016. 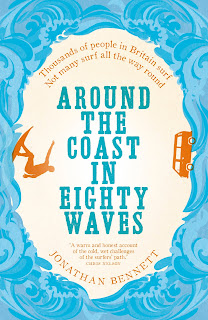 You can order it from your local bookshop, or buy a copy here.

Many thanks to everyone who helped and supported me, both during the trip itself and throughout the long road to publication.

I have finally finished writing the book about my surf trip around Britain.

Swimming in the Arctic in Winter

Swimming in the Arctic in January is not a good idea. You just know it's going to be cold and painful.

Sure enough, it was. 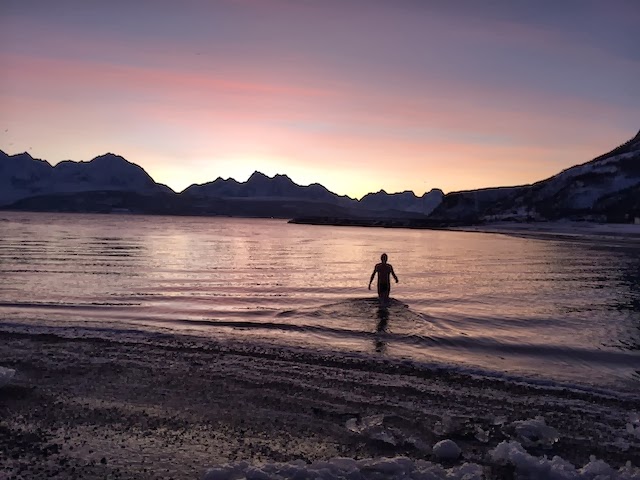 We spent last week in Oldervik, a small fishing village about 30 miles north-east of Tromso, way inside the arctic circle. No shop, no cafe, no provisions of any kind except cod, which you can buy at the harbour, fresh off the fishing boats.

Karen's sister Morag organised a group of us, specifically to see the Northern Lights, which are particularly active this year and next. We took Cordelia, terrified she would succumb to frostbite or wolves. But she loved it, and somehow we avoided both frostbite and wolves.

We stayed at The Riverhouse, run by the lovely Sarah and her absent partner Jim. It's about two hundred metres from the beach, where the river carves a deep channel out into the fjord. The fjord is very long and fairly narrow, so there's no chance of waves reaching that far. So usually I would have been content to admire the view and not contemplate anything so stupid as getting wet.

This year is different, though. This year, I've been seduced by the pleasures of cold-water swimming, and have found myself drawn to the Brockwell Lido - outdoors, unheated -  two or three times a week. I thought that was pretty cold. But one of my Lido buddies Robin encouraged me to try swimming in Norway. So I did! Every day! And twice one day, for some reason!

Stills are on the way, but in the meantime, here's a video that Alison took, and Morag added to and edited.

Eighty Waves in the Independent

I had an article in Saturday's Independent about my trip through the Hebrides. It was rather brief and perfunctory, I'm afraid, compared with the rich detail of the similar section in my forthcoming book!

Also, it seems to have been filed under the Americas! Surely the Independent travel sub-editors know where the Hebrides are, don't they? Maybe not.

Here's a link to the article, so you can see it in its full technicolour glory. And below, the article itself: http://www.independent.co.uk/travel/americas/around-the-hebrides-on-the-crest-of-a-wave-7603109.html

Around the Hebrides on the crest of a wave

One of the first rules of surfing (after "Don't learn, because it will take over your life") is "Never surf alone". So if you're planning on surfing in the Hebrides, it's a good idea to take a friend. Not that I was alone, exactly. As I paddled out into the clear, green water, I noticed an old man bobbing around, no more than 20 yards away, staring at me with undisguised curiosity.

I did a double take. My bald, bewhiskered observer was in fact a grey seal. But apart from the seal and a pair of gannets, I had the mile-long bay to myself. Ivory sand. Emerald water. Lush dunes. For surfers, the Hebrides is a chilly paradise.

Three hours from Oban, Tiree was just a stepping stone on my trip to the Western Isles. Any small island stuck out in the Atlantic with beaches facing all points of the compass is sure to have somewhere to surf, and after lumbering across flat, featureless moorland on single-lane roads, I stumbled across Balevullin, where local surf instructor Suds and his mate Adam were contemplating the waves.

Two weeks, 200 miles and eight Hebridean islands later, I would look back and realise that in surfing terms, this was a crowd.

After the small, green pancake of Tiree, the Outer Hebrides rise up out of the Atlantic like rocky crags strewn across the ocean. As I approached, glorious sunshine slanted through dark clouds, sending a rainbow over Kisimul castle, the small water-locked fort that guards the island of Barra and its main settlement, Castlebay.

A rocky, green peak looms above the bay, giving the village an oddly impermanent feel against the immensity of it environment.

I headed to Vatersay, a small island south of Barra, linked since 1991 by a short causeway. Here two lovely beaches sit back to back, separated by an isthmus covered in grassy dunes.

The leeward beach, Vatersay Bay, was as flat as a millpond; the windward, whipped up into brisk whitecaps. More fine, ivory sand. More clear, emerald water. It's easy to become blasé about the rugged beauty of the Hebrides.

Barra itself is small enough to go round in an hour or two, which made it easy to check out all possible surfing options. Along the way, I bought freshly caught scallops from the packing factory before they could be whisked off to market in Spain, and admired Barra airport, where the beach doubles as a runway and departures are dictated by the tide.

Finally I opted to surf in front of the bright, modern Isle of Barra hotel. Not at the reef that beckoned from the middle of the bay, even though Juliet, the charming hotel receptionist, generously offered to keep an eye on me in case I got into difficulties. Instead I headed to the adjoining beach, where powerful, shoulder-high waves were rolling in, sheltered from the worst of the wind by a rocky promontory.

Afterwards, I sat in the hotel's comfortable lounge to watch the sun sink into the horizon, feeling like a salty sea dog.

From Barra it's a short hop over to South Uist, but the contrast couldn't be more striking: bleak and rocky, it feels a lot more rugged. The road runs north through heather-covered moorland etched with trenches where peat is still dug for fuel – a stack of peat bricks stands outside many of the houses throughout the Hebrides, often next to a modern oil tank.

The waves had disappeared, so I pushed on, over Benbecula and up to loch-riddled North Uist, stopping only to buy a freshly boiled lobster for little more than the price of fish and chips. At Hosta, the swell was big and clean, offering an exhilarating surf in head-high waves on another pristine, deserted beach, bordered by rocks. My exhilaration was only slightly punctured when a local surfer, who arrived as I was leaving, announced that he couldn't see anything worth surfing and promptly left. Maybe they measure things differently in North Uist.

Then a 60mph wind began to blow in, closing down the ferries. It wasn't quite brisk enough to cancel the buses, though, so hardy school kids cheerfully struggled in to school. For the less hardy tourist, walking on the beach was hard enough, let alone surfing. Even Lochmaddy's otters were keeping their heads down.

Eventually the wind calmed enough for the ferry that traces a precarious zigzag through the treacherous reefs to Harris. Shaggy highland cows watched demurely as I picked a path through their meadow, past one of the many Neolithic standing stones on the islands, to the long, exposed beach at Scarista. Here I endured an unsatisfactory post-storm surf.

Then I travelled up through the eerie moonscape of the Golden Road along the east coast of Harris, where crofters scraped out a miserable existence after being turfed off the land to the west during the Clearances.

I visited the restored village of "black houses" at Gerenin on Lewis. These thick-walled dwellings, roofed with turf held down by ropes and rocks, wereonce thick with peat smoke and the stench of livestock – which often lived under the same roof. Those winter nights must have seemed interminable. One house has become a museum, complete with peat fire; the rest are now holiday homes.

After covering the length of the Western Isles, the wide beach, low dunes and clean waves of Eoropie at the northern tip of the chain provided a stunning backdrop for a final sunset surf. Then there was just time to hit Stornoway, where every pub has a live band and a shelf-full of whiskies – and to work out when I could return.

Jonathan Bennett is writing a book on surfing his way round Britain. His blog of the trip is at www.eightywaves.blogspot.com

* Caledonian MacBrayne (0800 066 5000; calmac.co.uk) operates routes to and between the Hebrides. Various "Hopscotch" tickets, valid for one month, link popular destinations. Hopscotch 8 connects Oban to Ullapool (or vice versa) one way, via Barra, South Uist, North Uist, Harris and Lewis, with an optional stopover at Tiree. (£32.50 per passenger; £138 per car).

* The Gatliff Hebridean Hostels Trust (gatliff.org.uk) runs hostels in converted black houses at various locations, from £12 per night for adults, £7 per night for children.

COMING SOON: THOSE 80 WAVES IN FULL

Normal service will be resumed shortly...
No comments: 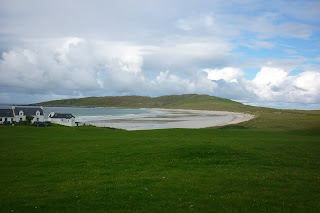 Conditions were small, with just a gentle, waist high wave peeling left and right, and breaking into clear, clean water. A seal was bobbing around for a while, curious to know what was going on. It wasn't epic surf, but fun, and a beautiful place to be surfing alone. 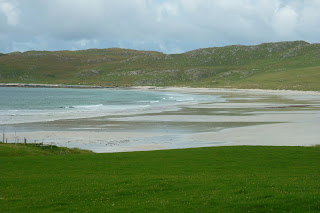 Earlier, I had seen another seal as I had breakfast, on the other side of the island. This was the view from my bed, when I woke: 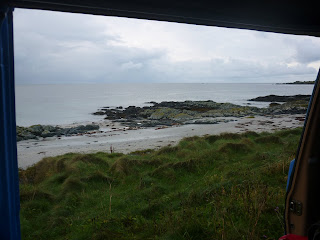 Finally, waiting for the ferry, I explored this beach, with a lovely clinker rowing boat called Isabella pulled up to the high tide mark, on the sheltered side of the island: 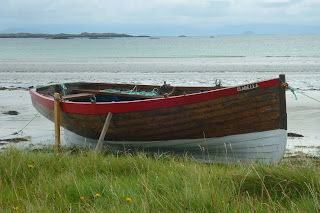 I messed around having lunch and doing van chores until eventually the ferry arrived, and took me off to Barra, damp and salty and excited to be moving on. 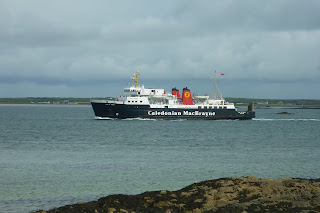 This is where it all started, straight off the 5 a.m. ferry from Oban, the very first wave of the trip. 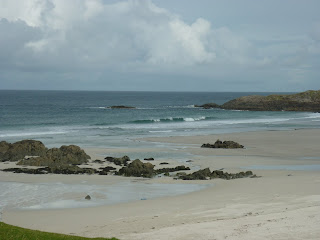 Tiree is a small, flat island about three hours from the mainland, separated from Coll, its neighbour and mirror image, by a narrow, swirling sound less than a mile across. Covered in lush grass, with just a couple of hills and only a handful of trees, it feels both desolate and domestic at the same time.

The beach at Balevullin looks north west, out towards the wild expanse of the Atlantic, catching any waves going. It's a beautiful place, with fine, bone-white sand edged by thick grass, and water as clear and crisp as a mountain spring. 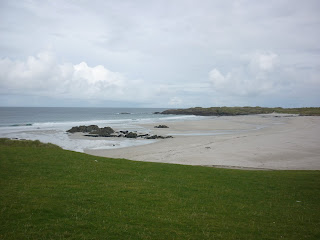 There wasn't much swell about, and the waves were no more than waist high, but very clean and fairly fast, with a light off-shore wind keeping everything smooth and well-groomed. As it was the start of the trip, I was disgracefully unfit, despite all those early-morning sessions at the pool, and I had trouble getting to my feet fast enough. A LOT of trouble! Local surf instructor Suds and his friend Adam were out - and doing a lot better than I was. 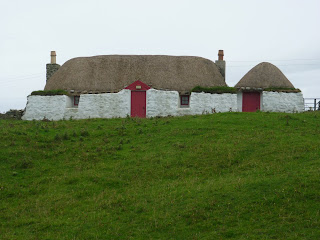 The tide was dropping, and with it went most of the swell, unfortunately. As the tide comes in, there are rocks at the southern end of the beach to contend with, and a small rock lurking in the middle of the line-up to avoid. Other than that, it's perfect.

A few years ago, I spent several months living in a van, surfing my way round Britain. I started in the Hebrides and headed clockwise, ending in North Wales fourteen months later. For a map, click around here.

Many thanks to everyone who supported me on my travels.

My account of the trip is published by Sandstone Press.